CENTRAL SQUARE – A CELEBRATION OF DIVERSITY 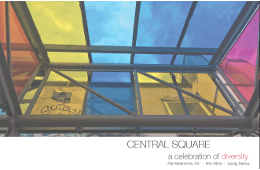 At the end of the 19th Century Central Square consolidated its position as Cambridge’s emerging downtown.
The business district expanded, erasing the physical distinction between the old villages into a civic center.

Cambridge had long since become a heterogeneous city of immigrant working people, college faculty, and commuting professionals, but it was still wrestling with the contradiction between its image as a middle-class city of single-family homes and the presence of a large working class that needed decent affordable housing.

Even after the opening of the subway in 1912, Central Square residents continued to shop locally for personal and household goods and services. The number of small businesses continued to grow. Regional and local department store chains sold a variety of clothing and household goods at affordable prices. This was a period where local hardware, furniture, shoe, and drugstores proliferated, and service-orientated businesses flourished. One unique aspect of the place is that many salespeople lived in nearby neighborhoods, contributing to the family atmosphere in the Square.