Lives in Limbo: Immigration as a Human Rights Issue

Lives in Limbo: Experts Discuss Immigration Policies and their Impact

The face of an asylum-seeker is a 28-year-old Honduran woman, who was beaten and raped from age 16, pushed off a 25-foot cliff into a raging river, and left to die by her abuser.

It is the face of a mother from El Salvador escaping the violence of the country with her five-year-old child in tow, following the murder of her 14-year-old son at the hands of a local gang.

It is also the face of a Ugandan woman who fled her country after being raped and beaten by a domestic abuser, and then again by the police she ran to for safety.

Mojdeh Rohani, the executive director of the Community Legal Service Center in Cambridge, said these are the typical stories of refugees they see every day seeking counseling for a lifetime filled with the trauma that did not end when they reached the United States border seeking safety, help, and asylum.

“These are the voices and this is very real,” said Rohani, whose agency provides free legal, and affordable counseling services for low-income residents and immigrants. “It is not like the trauma just happens at the border, the trauma of separation is just the last thing in a whole line of tragic events that these individuals go through.”

Rohani was a panelist for a recent forum “Lives in Limbo: Immigration as a Human Right Issue,” sponsored by the Cambridge Community Foundation (CCF) at the Cambridge Public Library June 27. More than 150 people attended the briefing and discussion, which focused on the swelling crisis surrounding U.S. immigration policy and the systematic crack-down on individuals and families seeking asylum at American borders. The issue affects thousands of undocumented migrants and their families in Cambridge, Boston, and across Massachusetts. 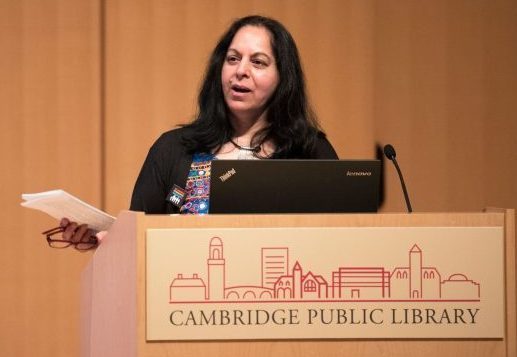 Geeta Pradhan, president of the CCF, said the forum is part of a series of programs and efforts to not only help bring light to the immigration issue, but also to continue the CCF’s long-standing dedication to the rights of immigrants coming into the community. The foundation partnered with the City of Cambridge in March to establish the Cambridge Legal Defense Fund to support nonprofit organizations that provide services to immigrants and asylum seekers.

“The Cambridge Community Foundation has worked for decades in the area of immigrant rights in partnership with local nonprofits and donors,” said Pradhan. “The urgency of the immigration crisis has continued to deepen from DACA ­– which lead to the creation of the fund to protecting status workers and asylum seekers ­– to the heart-wrenching issue of separating parents from their children and now the Muslim ban. Concerned citizens across our city are responding to the need.”

The forum panel included people on the front line of the immigration crisis, including Daniel Kanstroom, a professor of law at Boston College and co-director of the university’s Center for Human Rights and International Justice; and Michael J. Wishnie, the William O. Douglas Clinical Professor of Law and Counselor to the Dean at Yale Law School. For many years, Wishnie, with his students, represented low-wage workers, immigrants, and veterans in federal and state litigation. Forum Moderator Susan Church is a trial and appellate attorney focusing on immigration law and criminal defense.

“It’s time we start putting our bodies, our wealth, our privilege inline for justice,” said Cambridge Mayor Marc McGovern in his opening statements. “I look forward to these conversations and working with our community in finding concrete ways to harness the outrage we feel, put an end to this injustice, and make Cambridge and our country the socially and economically just community we truly want it to be.”

With the onslaught of breaking news surrounding the immigration crisis, whether it’s from the Twitter account of President Donald J. Trump, or the reporting of national media, the current and ever-changing situation is difficult to follow.

At this point in time, millions of people are being banned from entering the country because of their religious belief or their country of origin. Legal residents are being deported for prior and minor criminal offenses. Asylum-seekers are being prosecuted as criminals in “assembly line” courts. Children are being separated from their parents seeking asylum and are put in detention centers at U.S. borders. The Trump administration has also banned journalists from entering the centers and is working to end the Deferred Action for Childhood Arrivals (DACA) program.

“These are some of the most compelling human rights issues, and I believe one of the most compelling human rights movements of our time,” Kanstroom said. “The immediate cause is the policies backed by Mr. Trump, and I do believe there is real racism there. But the reality is deeper and more complex than that. We are experiencing the culmination of what amounts to a long crisis over immigration in this country.”

He said today’s immigration crisis is fundamentally an unresolved issue dating back to the founding of the nation, echoing the Alien and Sedition Act in the 1790s, the Nativist movement of the early 19th century, the Chinese exclusion act of 1882, and Japanese internment during World War II.

But it also has its origins in legislation passed by Congress in 1965 that placed major restrictions on western hemisphere migration, Kanstroom told the audience. For generations, Mexican and other migrants who used to relatively easily cross the border to work, had to have visas following the passage of the new laws. Another set of laws passed in 1996 and signed by President Bill Clinton, created the possibility of accelerated deportations.

“And now you can see this in practice all along our southern border, also in Maine, New Hampshire, Vermont, and New York,” he said. “Checkpoints, quick arrests, detentions – many citizens worry that we could soon be living in a police state. Non-citizens have lived in one for more than two decades, and it has gotten much worse in the last 18 months.” 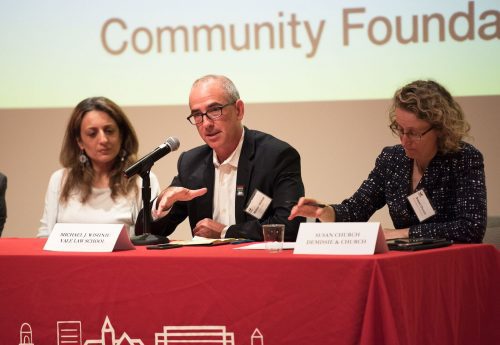 The big questions on many peoples’ minds today, is what can they do to help bring about change, or at the very least, help people in the midst of the crisis.

Wishnie said those who wish to make a difference need to be prepared to go beyond their comfort level in terms of financial giving and devotion of their time. People can donate to nonprofit organizations providing legal and counseling support to immigrants and asylum-seekers, join local and national protests, be present in the courtroom for an immigration hearing, or witness a U.S. Immigration and Customs Enforcement (ICE) checkpoint at a U.S. border. Talking to friends, relatives, and neighbors about the issue, as well as voting and campaigning for candidates who reflect your values, also matters, he said.

“If people under so much stress in immigrant households can carry on, I think we have to as well,” Wishnie said. “So, what can be done. The first thing I wrote down was ‘give money.’ Whatever your level of giving was, it should be a little bit more. I think all of us have to do a little bit more.”

In his closing remarks Roberto G. Gonzales, a professor of education at the Harvard Graduate School of Education, said immigration can feel like a national debate that is difficult to influence on a local level. But in Massachusetts, there are about 210,000 undocumented people, including 8,000 DACA beneficiaries. In addition, there are more than 12,000 Temporary Protected Status (TPS) holders in the state. 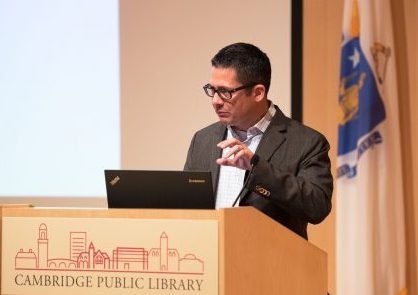 “This is a national issue, but every single policy we’ve talked about tonight is being felt locally by people within our communities, in our schools and those feeling the brunt of this,” Gonzales said. “It is time for us to be courageous in our actions and to really stand by immigrant families.”