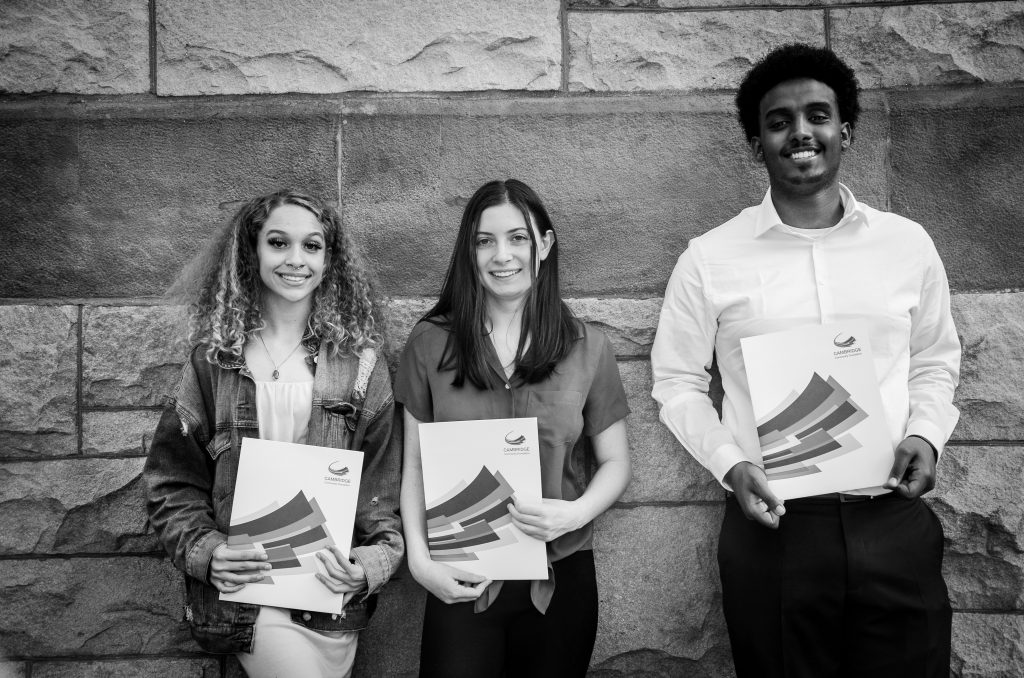 Photo by Kristen Joy Emack of scholars named in Spring 2021.

This month, the Foundation and our donor-partners awarded four graduating Cambridge Rindge and Latin School (CRLS) seniors the Falcon Pride Scholarship, now a four-year, $6,000 source of support during college. At a small gathering at CRLS on June 13, Charlotte Brann-Singer, Naomi Brook, Amanuel Gebru, and Alysia O’Brien were presented with the award. These scholars are ambitious and hardworking dreamers, who have displayed the necessary persistence to manifest their goals and dreams into reality. The students are brimming with excitement about their futures, and they are thrilled to have these scholarships demonstrating the Cambridge community’s commitment to their success.

Recipients who are often from first-generation or low-income families feel an endearing sense of community and pride. “It represents where we are from,” said Amanuel Gebru, a member of the most recent cohort, and an aspiring business management major at Salem State University. “It’s taking pride in our community and remembering what raised you.”

The Falcon Pride Scholarship is a unique multi-year scholarship supporting college persistence. Envisioned by parents and alumni of CRLS, in partnership with the Cambridge Community Foundation, the Falcon Pride Scholarships are designed to support CRLS students who have the determination and passion to pursue postsecondary education but do not have the needed financial resources.

A myriad of concerns regarding inequity led to the creation of the scholarship fund. Among them was college retention. The data shows that if students complete their first two years of studies after high school, they are much more likely to finish with a degree. However, the vast majority of scholarships are for the freshman year only. Falcon Pride co-founders Liz Keating, Andus Baker, and his wife Rowan Murphy envisioned a multi-year scholarship for local students to counter that trend in Cambridge.

Each spring, CRLS selects four scholars to receive $1,000 in their first year of college, $1,500 in their second, and $1,500 again in their third year. Last year the Falcon Pride Scholarship expanded to become a four-year, $6,000 scholarship, with an additional $2,000 now being awarded in the scholars’ final year. Twenty scholars have been named since the Fund’s founding in 2017.

The scholarship donors are actively raising additional funding, as well as non-monetary forms of support. The fund was launched with a $50,000 grant from the Foundation and seed funding from co-founders Liz, Andus, and Rowan. To date, 66 generous donors have contributed and the Fund has grown to more than $550,000.

Through the Falcon Pride Scholarships, these donors are  investing in students so they can focus their energy on academics and achieving their goals.

“Falcon Pride is like a hand,” said Roodeline Guichette, a graduating early education major at UMASS Boston. “I was struggling at the beginning of college, trying to figure out my passion, my career, and what I want to do. Falcon Pride gave me a hand and allowed me to keep going. I didn’t have to worry so much about money, but I did have to make sure I was doing my best because I had a hand right there…Every semester they gave me that push.”

2021 also marks college graduation for the Falcon Pride Scholarship’s inaugural cohort. Congratulations to Roodeline Guichette, Narinka Guichette, Andre Domond, and Natalie McPherson-Siegrist for their continued excellence at their respective schools. As the first graduating Falcon Pride Scholars, we are especially excited about the futures of these hardworking students and hope to continue supporting their journeys.

Let’s continue to give our students the helping hand they deserve! To support the Falcon Pride Scholarship Fund, visit our donate page.

To learn more about the scholars and the donors who support them, please visit our Falcon Pride Scholarship page.

Written by Alfred Taylor. Alfred is a Political Science and Philosophy double major at The George Washington University and a 2019 CRLS graduate interning at the Foundation this summer, thanks to the generosity of the Zandy Bard Fund.