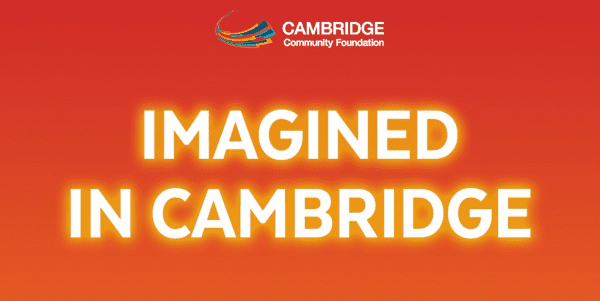 Article by Adam Sennott for the Cambridge Chronicle

The Cambridge Community Foundation awarded $14,000 in microgrants to 28 organizations and individuals with projects focusing on social justice, creativity, culture, and community building earlier this month.

The $500 grants were awarded as part of the foundation’s Imagined in Cambridge! program. All  recipients were past award applicants and were designed to help groups and organizations take an established project to its next level.

Among the recipients was Tony Clark, a Cambridge resident who used the funds to buy equipment so he could launch his podcast, “The People’s Classroom,” which aims to  engage more residents in local civic life.

Dana Ianculovici was given funds to hire a local composer to workshop an original musical performance, “The Wizard is Us!”

She hopes to perform the work this fall.

Others are using the money to build a social media presence, cover print costs or alter websites.

“A few projects, including Good Bank, Kings Table, and Cambridge Mutual Aid Network are turning around the dollars to give to community members through cash grants, intern stipends, or artist fees,” the statement said.

Where did the funds come from?

The funds for the program were provided to the foundation through contributions from Verizon and a Cambridge family. Cathleen Finn, Verizon’s community engagement director, said in the statement that the company was happy to help make these projects a reality.

“Cambridge is known for innovation, and we’re glad to support efforts like the foundation’s that help spur innovation at an early stage, when people really need support to develop or scale their ideas,” Finn said.

Geeta Pradhan, president of the Cambridge Community Foundation, thanked Verizon and the Cambridge family for their contribution in a statement emailed to the Chronicle.

“By granting small but impactful boosts of cash, the Fund enables residents to advance ideas informed by lived experience,” Pradhan said. “Innovation is in Cambridge’s DNA. Alongside the tech and scientific innovations we’re known for, there are people and groups across Cambridge with great ideas to improve quality of life for our city.”

What the grant recipients had to say

Several grant recipients responded to emails to tell the Chronicle what they were planning on doing with the money, and the impact it will have. Among them was Ruby Rose Fox, a singer/songwriter who started a workshop program with trauma-informed therapist Jennie Knott, called The Unstoppable Performer, which harnesses neurobiology to help performers regulate their nervous systems and navigate stage fright.

“We hope to give people physical and psychological tools to regulate their nervous systems and find safety in community activism and engagement,” Fox added. “Basically, if you are stressed…come to this workshop.”

She said the grant would go towards design and labor for the program.

“The micro-grant contributed 100% to making this a reality and was inspired by my experience in fighting City Hall for the last musical practice space in Cambridge,” Fox said. “Ultimately, I lost the fight but I would like to help others stay in the game and keep making Cambridge a more equitable and beautiful place to live.”

“Our mutual aid fund is funded by individual and organizational donations,” the organization said in a written statement. “We have received and redistributed more than $150,000 to Cambridge families and individuals in the form of direct aid microgrants and grocery care packages. These grants met the immediate and diverse financial needs of Cambridge neighbors including, for example, ensuring food access and housing stability.”

This CCF grant helped the network pay rent that was due the next day, as well as to purchase medications and food for families who are feeling the “mounting impacts of limited income in the context of COVID.”

Through Sept. 9, grassroots innovators who have an original idea or program to improve quality of life in Cambridge can apply for the Foundation’s Imagined in Cambridge! Social Innovation Award, which provides $5,000 to each winning project. Details at cambridgecf.org/imagined-in-cambridge.