From The Boston Globe: “Cambridge to begin guaranteed income program for single-parent households” 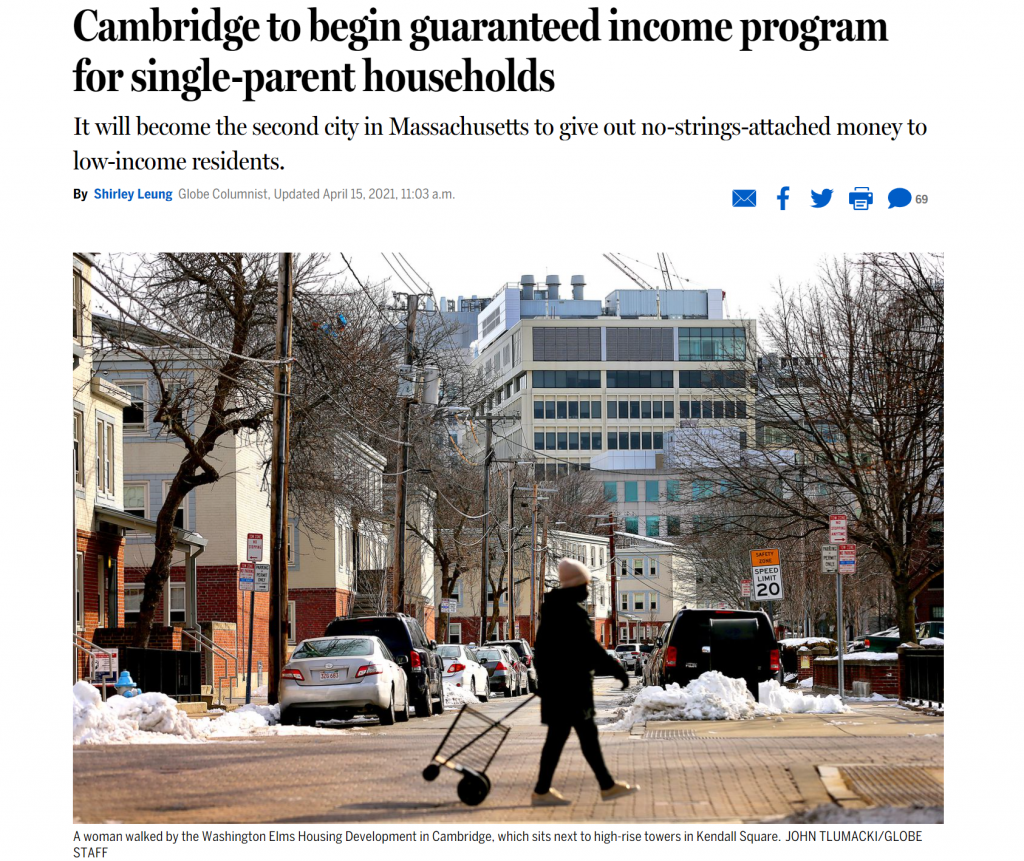 Cambridge is set to become the second city in Massachusetts to give out no-strings-attached money to its poorest residents in an 18-month pilot program that will begin in August.

Mayor Sumbul Siddiqui announced Thursday that the city, through a public-private partnership, has raised $1.5 million for an initiative that gives out $500 a month to 120 households headed by a lone caretaker, such as a single mother. Last November the city of Chelsea launched a similar program for about 2,000 low-income families in what is considered the country’s biggest experiment of the guaranteed income idea.

“I am excited to be part of this movement,” Siddiqui said. “I’ve seen the real everyday effects of economic insecurity, and I think this will be a really powerful tool. It’s effective and immediate.”

Cambridge is home to rich universities and money-making biotechnology companies, but also to some of the region’s poorest residents. One out of every 10 families with children in Cambridge under the age of 18 live below the poverty line. A new study by the Cambridge Community Foundation found that 20 percent of the city’s population earns an average of just $13,000 a year, and of the families with children in this income bracket, nearly 70 percent are headed by a single caregiver.

Policymakers have long debated whether giving cash without conditions can lift people out of poverty. Some believe the strategy empowers people to make decisions that break the cycle of poverty. Others worry free-flowing money would encourage poor people to quit their jobs or spend it unwisely.

Then in February 2019, Stockton, Calif., launched a guaranteed income experiment that gave 125 low-income families $500 a month, a program that gained national attention. Stockton found that people spent the money primarily on food and that most recipients kept working. Beyond economic benefits, they were less anxious, less depressed, and less fatigued from financial stress.

Cambridge, like other cities, gained experience in giving away money to residents and businesses as part of disbursing COVID-19 relief funds. Cambridge distributed about $5 million to more than 1,500 individuals, families, businesses, and art organizations.

Siddiqui began laying the groundwork for a guaranteed income pilot last fall by reaching out to potential funding partners. Her first call was to Geeta Pradhan, president of the Cambridge Community Foundation, which had given out no-strings-attached COVID-19 emergency grants to 1,475 individuals and families who live, work, studied, or worshipped in the city.

Pradhan said the experience of distributing these payments demonstrated how desperate Cambridge’s poorest residents had become.

“We were getting these two-line letters — no food, cannot pay rent — it was heartbreaking,” she said.

For Pradhan, funding a guaranteed income pilot was a no-brainer. “We just jumped on board,” she said. “This is so on point with everything we are doing.”

The Cambridge foundation became a major donor, kicking in $100,000, as did Harvard University and the Massachusetts Institute of Technology. The Boston Foundation and other nonprofits contributed $50,000. The city of Cambridge has set aside $155,000, while the biggest donation of $500,000 comes from the Mayors for a Guaranteed Income, a network of mayors advocating for the policy.

The city has launched a website, cambridgerise.org, and will soon accept applications to the program — formally known as Cambridge RISE (Recurring Income for Success and Empowerment). To be eligible, households must be headed by a single caretaker with children under the age of 18 and fall below 80 percent of the area median income, which is about $86,650. The 120 participants will receive monthly payments through a debit card.

Eligible applicants will be selected in a lottery conducted by the Center for Guaranteed Income Research at the University of Pennsylvania, which is working with Cambridge and other cities doing pilots.

Chelsea expects to wrap up its six-month guaranteed income pilot in early May. Families, depending on the size of their households, have been receiving between $200 to $400 a month, money that can be used for anything from food to paying bills. The city funded its initiative through federal COVID-19 relief funds, as well as donations from the Shah Family Foundation, the United Way of Massachusetts Bay and Merrimack Valley, and Massachusetts General Hospital.

Tom Ambrosino, Chelsea city manager, said the program has helped with food insecurity and that preliminary data indicates that “those in need spend these unrestricted funds responsibly, and the extra money improves health and welfare outcomes for the families.”

Researchers from the Harvard Kennedy School, working with the Shah foundation, also have been studying the 2,000 families in the program, and the analysis will help inform what’s next for Chelsea’s income experiment.

Ross Wilson, executive director of the Shah Family Foundation, which has been advising Cambridge on its program, hoped more communities would experiment with monies from the latest federal rescue package.

“We’re thrilled to have close partners in Massachusetts,” said Wilson. “We are hopeful more and more local cities and towns will view this as a really good strategy and potentially use some of the federal dollars they are receiving to run pilots and see if this works for their communities.”