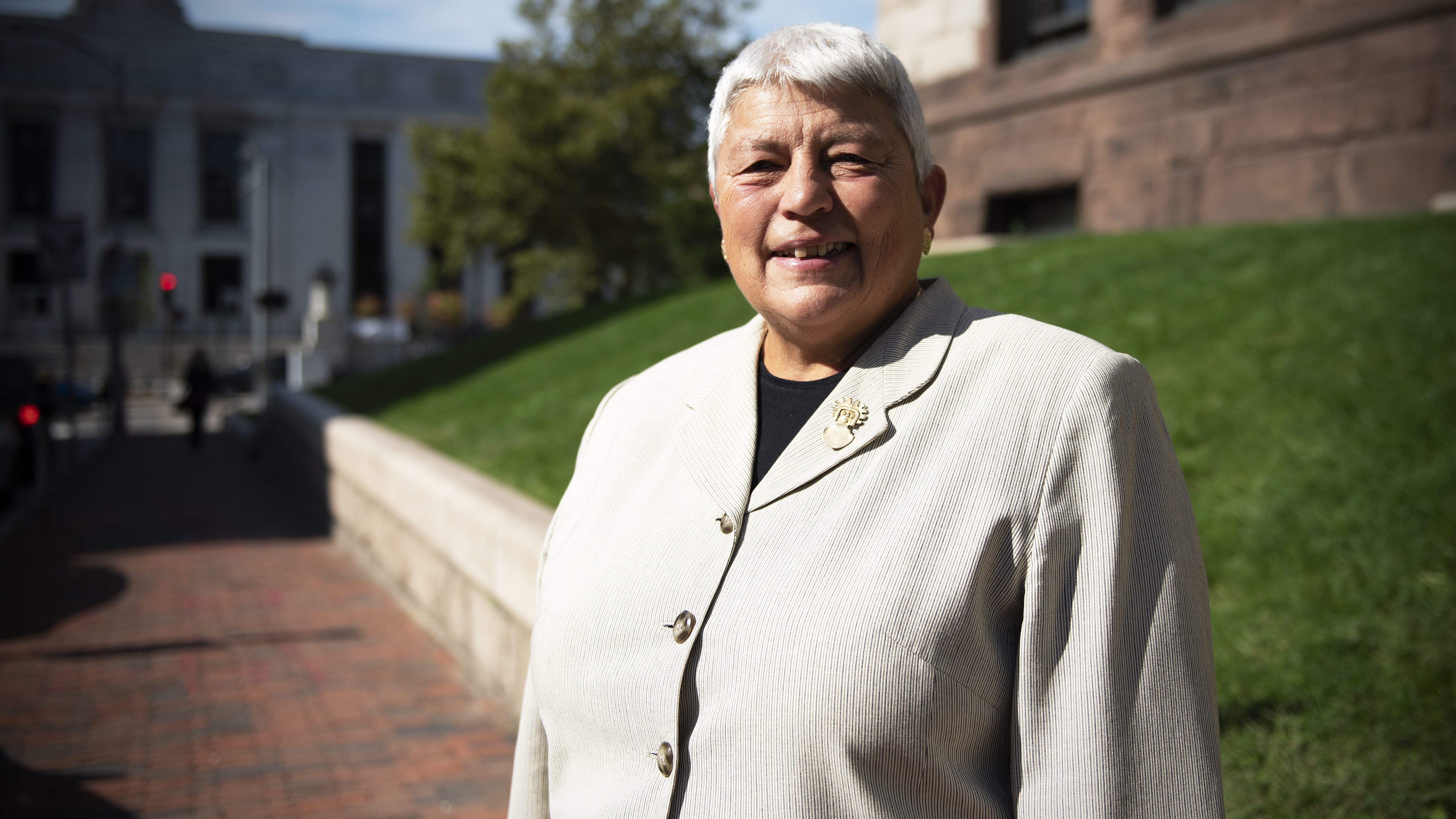 If it weren’t for the Yellow Pages, a ride from a friend, and some good luck, Elaine DeRosa may not have spent nearly four decades changing lives.

The former executive director of the Cambridge Economic Opportunity Committee (CEOC), who retired March 2018, has always been pretty lucky, and her mission has always been to share it.

DeRosa was the second generation in her Sicilian family to be born in America, and the first to go to college. In her junior year she hitched that ride to Cambridge hoping she might find work for her Springfield College required field placement and landed at CCF who sent her right to CEOC – an organization offering assistance such as housing, health, and food services to less fortunate members residing in the economically diverse community of Cambridge.

When DeRosa arrived at CEOC on that afternoon in 1971, they were in the process of organizing city funding for neighborhood health centers and needed someone to distribute pamphlets. She volunteered, and when she graduated in 1973, by another twist of fate, there was a permanent position open.

“I couldn’t imagine getting paid to do the incredible work of CEOC,” DeRosa said. “We had so many presidents who wanted to get rid of community action, but this was a job I just loved to do.”

The longtime leader of the organization knows that CEOC has made a tremendous difference in the community it serves by finding a way around barriers. Their role is to figure out what to do with the limitations people face, strategize, and find another angle. Programs lead to policy and CEOC’s policy initiatives have made a difference, she said, because advocacy around public policy is about the people, not about the issues.

“We can go through the list of initiatives we championed or co-led with others, but it’s the voice of the people we represent, normally disenfranchised, their voice being heard, that is what makes the difference, the action,” DeRosa said. “You come to us, it’s the whole package. I say proudly and with real pride, we make a difference.”

That difference is always felt, even with decreased funding and centralization. When DeRosa started, there were six neighborhood offices each with planning teams targeting six low-income neighborhoods. The group eventually consolidated to one central office and now maintains 11 employees, servicing the needs of community members in a “one stop” setting.

“We have always figured out a way to get laptops, do food stamps, development, FAFSA assistance,” DeRosa said. “Every day you just roll up your sleeves, because we have come up against a pretty sanctioning government. If you’re at the bottom it’s a real slap in the face.”

Although she said she doesn’t have the golden answer, what she has helped CEOC achieve over 40 years has positively impacted the Cambridge community and beyond.

One of their biggest challenges she said, involved a 25-year legislative campaign at the Massachusetts statehouse leading to the preservation of affordable housing units in Cambridge that were originally built with private funds. When laws changed giving developers the opportunity to sell their properties, CEOC worked with the city for public money to keep residents from being displaced.

DeRosa also worked with her staff to create programs around healthcare for women and teens, a family planning program, assistance with abuse, and a 10-week comprehensive sexuality program called “Know Your Body”, initiated in Cambridge Public Schools.

Tina Alu began at CEOC as the sexuality education coordinator and worked alongside DeRosa for 31 years before becoming executive director following DeRosa’s retirement.

“Elaine is a fierce advocate, she saw issues that impacted people and said, ‘what are we going to do to change this to improve people’s lives,’” said Alu. “She was tireless and very skilled. It was never about her or the agency, it was about doing the right thing.”

Geeta Pradhan, president of the Cambridge Community Foundation, said DeRosa has been an amazing advocate for families experiencing inequality for most of the life of the agency.

“This is a group of people who are phenomenally supportive, respectful of their clients, and they are such passionate advocates for people in poverty, in a city with growing income inequality and consistent poverty,” said Pradhan. “This is a really critical role.”

DeRosa may have left her official CEOC role, but she is staying involved in city council and housing issues, and still refers to her work with the agency as “we.”

“I’m not that far away from the organization and now my citizen work will be in collaboration with the agency priorities,” she said. “We have big issues in Cambridge around zoning and around affordable housing, and we need to make sure other voices are heard.”

DeRosa is also enjoying her grandson Ethan Davis’ sports endeavors. She attends every game the Arlington Gibbs School sixth grader plays and likens his team’s enthusiasm to her former organization.

“We were a great team at CEOC, a great staff, we all pulled together, and that’s a great advantage,” said DeRosa. “I’ll continue to be involved in affordable housing work, but in the meantime, my grandson started basketball, and all of this fits into the puzzle of what helps makes success.”