Performances that spark dialogue in Cambridge.

Previous Next
Performances that spark dialogue in Cambridge. 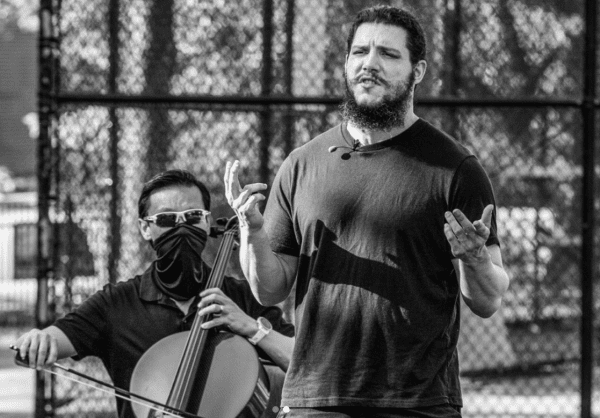 In beheard.world’s most recent piece Together, Six Feet Apart, masked dancers sweep effortlessly across a basketball court in Bromley Heath public housing, synchronized with a cellist and the powerful words of a poet. Like so many businesses and arts organizations, when the pandemic reached our community, local performance and film nonprofit beheard.world had to fully pause their operations. Without the space or freedom for their social justice-driven artists to collaborate in person, they strategically used this time to brainstorm new projects that would continue conversations around racism.

With a grant from the Foundation’s Cultural Capital Fund in partnership with the City of Cambridge, beheard filmed and recently premiered Together, Six Feet Apart at the Roxbury International Film Festival in June 2021. The short film features 12 artists who, through movement and poetry, share stories of living in Boston’s largest public housing development during COVID-19. It is a statement meant to move audiences past the intellectual issues of the racial divide to emotional places where racism resides for Black, Brown, and white people. This piece is just one of many performances and films in beheard’s 10-year history of helping individuals, communities, and cultures tell beautiful stories that need to be seen and heard.

Additionally, the Cultural Capital Fund allowed them to create a postcard project, in which 400 postcards were distributed to Dorchester’s Boston Collegiate Charter School, asking students “What are you fears and hopes about racism?” The cards were decorated with twenty posters and made into art works dispersed around Central Square. Anna Myer and Jay Paris, Co-founders and Directors of beheard.world, expressed their gratitude for the Fund, explaining that the financial support enabled them to continue their work during the pandemic: collaborating with organizations like the North American Institute to screen films via Zoom, and writing and producing Together, which they are looking forward to showing in person to the Cambridge community.

Photo from the Invisible: Imprints of Racism tour, beheard.world’s documentary that follows a troupe of 15 diverse artists as they travel from Jackson, Mississippi to Chicago whose personal stories shed light on the deeper truths of racial divisions.

“There are few communities that we’ve been to that support the arts like Cambridge does,” Myer explains. To be based here, where organizations like the Cambridge Arts Council, CCTV, and many more breed a great interest and culture of the arts, “it gives us great energy and a great place to experiment.” Looking forward, Myer and Paris hope to see Cambridge create more initiatives that shed light on the anti-racist work happening in our communities.

As dancer Jeremy Ruth Howes explains in the outro of Together, Six Feet Apart: “After the brutal killing of George Floyd, getting together and doing this work is even more imperative… in conjunction with COVID, it just seems like the world is at a reckoning.”

Join beheard.world on Wednesday, September 15 at 7:15pm, for a screening of two films – Together, Six Feet Apart and Lenox Street – at Starlight Square. Register for free tickets here. They will also be hosting a free showing of the two projects on September 16 at 7:15pm at Clement Morgan Park in the Port, followed by an audience talkback with the artists.

beheard.world is one of 40 grant recipients to date from the Cultural Capital Fund, established in October 2020 to address the urgent needs of the arts sector due to COVID-19. The Cambridge Community Foundation and the City of Cambridge have awarded a total of $360,500 to Cambridge-based arts and cultural organizations through the Fund. Help protects local arts and culture now and into the future – donate today to the Cultural Capital Fund.

Written by Madeleine Lachevre. Madeleine graduated from Bates College in 2018 with a Political Science degree and Gender and Sexualities minor. She interned with the Foundation this summer.