We honor and remember Elsa Dorfman and Tunney Lee, two of our Cambridge Cultural Visionaries who passed away last year.

The Cambridge Community Foundation focuses on the city’s cultural richness

The Cambridge Community Foundation has named 20 exceptional artists and creators as Cambridge Cultural Visionaries, recognizing, for the first time, a diverse and talented group of individuals who have had a major impact on the cultural richness celebrated in Cambridge and beyond for over half a century. In their honor and in recognition of the community’s commitment to safeguard the arts in our city and spark creativity of future generations, the Foundation will launch a new Cultural Capital Fund and honor the arts at its We are Cambridge celebration (rescheduled for March 11, 2021; register here to join).

Cambridge has been shaped by dreamers and visionaries throughout its history. A city of ideas and solutions, Cambridge boasts a long list of imaginative thinkers, writers, artists, innovators, and entrepreneurs who continue to call Cambridge home. The Cambridge Cultural Visionaries unanimously acknowledge that the city fostered their creativity. Cambridge is a place that supported their passion, tested their persistence, and revealed their purpose. It is a place where they “found their people.” (Jump to the full list of visionaries, or jump to view a graphic of the visionaries.)

With 83 years as the group’s median age, the visionaries are both artist-activists and active artists who continue to make art, teach, mentor, and nurture creative communities. Among the hundreds of honors they have received in the course of their careers are: honorary degrees; Newbery Medals; Oscar, Emmy, and Grammy Awards; MacArthur and Nobel Prizes; National Medal of the Arts; U.S. Poet Laureate appointment; American Academy of Arts and Sciences membership; and induction into the National Inventors Hall of Fame. Influenced by Cambridge activism in the late ’60s and ’70s, the Cambridge Cultural Visionaries also made building community a critical part of their craft and ethos. They create spaces where people can congregate and engage; their work educates, encourages us to stop, look, and listen, inspires discussion and action.

“As we honor the achievements of these amazing and diverse artists of national distinction, who are our neighbors, we must also ensure that the creativity and imagination of future generations is not stifled by depleting resources and inadequate funds; that we are able to continue to enrich our community by celebrating Cambridge’s diversity of cultures and the arts; that we are able to safeguard our tradition as a vibrant city, a place for innovation and new ideas,” said Geeta Pradhan, president of the Cambridge Community Foundation.

Nationally known as a world-class center for innovation and education and a hub for arts and creativity, Cambridge is not without its challenges. As its economy grows with an influx of new business and development, Cambridge is experiencing unanticipated consequences of growth. There are persistent racial disparities in income and education. One in seven children in Cambridge lives in poverty, with families of color disproportionately represented. Black and Latinx children trail Whites and Asians in math and science testing. Growing gentrification threatens Cambridge’s prized cultural and socio-economic diversity, artistic community, and eclectic population, with artists and arts organizations increasingly priced out of practice and performance space. Central Square’s designated cultural district has seen the displacement of organizations and artists, including the EMF building housing 300 musicians, T.T. the Bear’s Place, Studio 550 arts galleries, and, most recently, the Green Streets Studios.

At present there is no large-scale arts fund supporting creative initiatives in Cambridge. The Foundation aspires to generate a significant Cultural Capital Fund that can support the creative fabric of the city by sparking creativity and imagination in youth ages 3 to 19 through innovative programs that ignite self-expression, discovery, and leadership in social change, and bolster families and inclusion; elevating and sustaining Central Square, a designated Massachusetts Cultural District and the only one in Cambridge; ensuring the viability of the local arts and culture ecosystem to foster creativity and innovation through artist residencies, fellowships for cross-sector work, and community-building initiatives.

The Cambridge Cultural Visionaries will be honored at the Foundation’s 2021 We are Cambridge celebration with presentations and performances by Cambridge-based artists, an original documentary film project that pays tribute to the visionaries’ contributions, and an original work of art by award-winning Cambridge-based illustrator Louisa Bertman. The Foundation’s annual event draws hundreds of civic leaders from across the city’s sectors to raise awareness of the challenges the city faces and the solutions made possible through philanthropy, collective giving, and collaborative problem-solving at the Foundation.

“Visionaries dream big, help us see the world through different lenses, and imagine future possibilities. This extraordinarily creative group of people hold the essence of our city’s collective memory and have done so much to contribute to the city’s rich cultural fabric. We want to preserve and build upon their beliefs in art for the common good,” said Rick Harriman, Chairman of the Cambridge Community Foundation.

Founder/artistic director of the Art of Black Dance and Music, Inc., educator 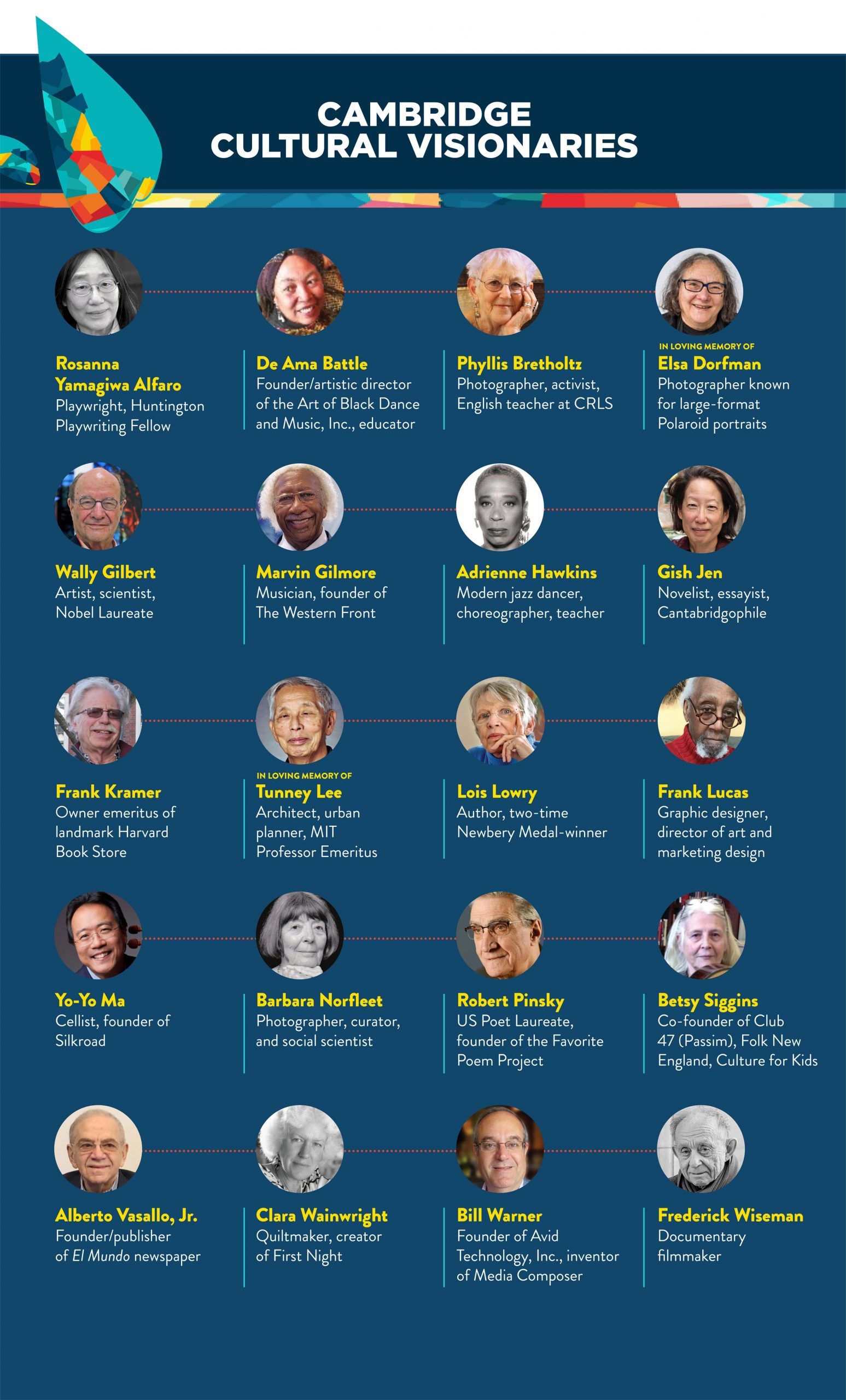 About the Cambridge Community Foundation: Since 1916, the Cambridge Community Foundation has been built, guided, and funded by Cambridge residents, and as an independent civic leader, brings together neighborhoods, organizations, and economic sectors to create a more diverse, inclusive, and vibrant city for all. The Foundation is the local giving platform for Cambridge, supporting our city’s shared prosperity, social equity, and cultural richness. The Foundation is a convener and catalyst for transformative change in Cambridge, supporting equity and opportunity in the city through civic leadership, grantmaking, and collective giving in partnership with generous donors from the community. The Foundation identifies emerging and critical needs, convenes all sectors of the city, and directs resources where they can make the greatest difference.

About the Foundation’s support of cultural richness: The Foundation has supported arts and cultural programs since its inception in 1916. Over the last decade, the Foundation has funded 70 nonprofits that contribute to Cambridge’s cultural richness, from local theatrical productions and youth musical groups to grassroots film festivals to dance programs that help heal residents struggling with mental and physical health. Some of these nonprofits, like the Community Art Center and Cambridge Art Association, have been partners of the Foundation for decades. Others, like Dancing Queerly and Cambridge Community Chorus, are newer nonprofit partners. The Foundation has funded the following initiatives in recent years: invigorating Central Square as a cultural innovation district; forming the Cambridge Creativity Commons, which offer engaging STEAM programs to Cambridge students, to bridge the gap between arts and science; and now, launching the Cultural Capital Fund to establish an independent pillar of long-term support for Cambridge’s arts and culture sector. Alongside generous donors, the Foundation works to ensure culture in Cambridge continues to thrive for generations to come.